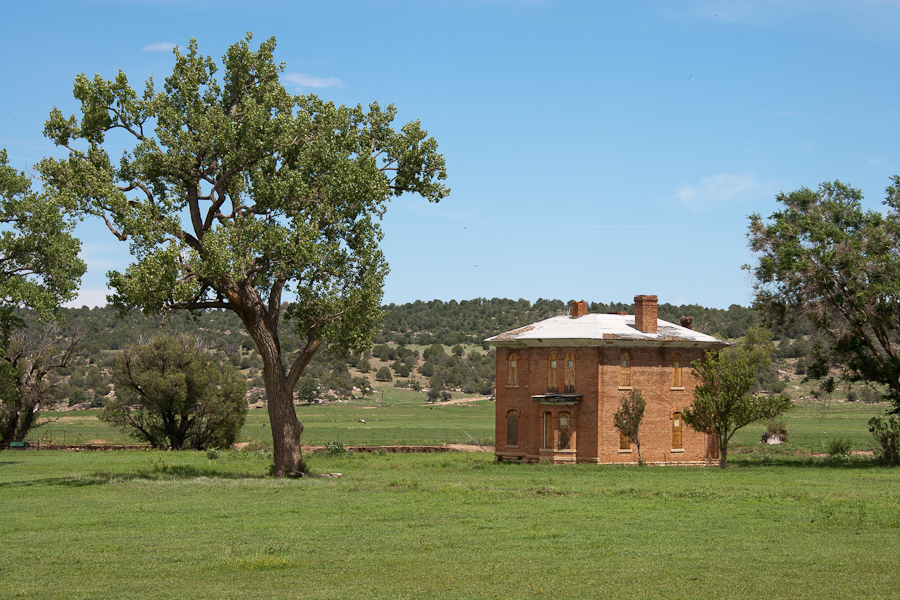 Black Willow Ranch has a rich history stretching back over one hundred fifty years. When Mexico ruled this land, it became part of the historical John Scolly land grant. By the time of the Mexican-American War, new owners were making the entire area an important destination on the expanding American map face. In the early 1800s, the town was called La Junta, a name simply meaning “the junction of two rivers.” Soon, Samuel B. Watrous would arrive and transform the area into a vital community.

Originally from Vermont, Watrous had been mining in the Ortiz hills when he first came to La Junta in the 1840s. Recognizing the fertility of the land, he abandoned mining and began farming and ranching. Soon he opened a general store, benefiting from the strategic location of this village situated along the Santa Fe Trail. This vital commercial highway eventually expanded to be a critical military route as well, and Fort Union was established just ten miles northeast of La Junta in 1851.

In the early 1860s, Watrous partnered with Enoch and William Tipton. The brothers had arrived in New Mexico in the mid-1840s with General Stephen Watts Kearney, who led the Army of the West in 1846. They also mined with Watrous in the Ortiz hills and, like Watrous, became inspired by the possibilities of the land fed by the Mora and Sapello rivers.

In 1862, Enoch Tipton purchased 10,000 acres with water rights—today’s Black Willow Ranch. He bestowed the name “Boone Valley” (after his former home in Boone County, Missouri) upon this idyllic valley nestled in the foothills of the Sangre de Cristo Mountains.

With adjacent ranches, the Tipton and Watrous families grew close and prospered together. They rai
sed oxen to haul freight and trained horses for use at Fort Union. They created a diversion dam in the Mora River and built an extensive acequia—a two-and-a-half-mile ditch to irrigate three hundred fifty acres. They produced alfalfa, wheat, oats, and corn—much of which supplied Ft. Union; and they are believed to be the first to grow timothy grass in the state. They also introduced the black willow tree to the area, from which the Tipton ranch would eventually take its name.

The Watrous and Tipton enterprises in land development burgeoned, but their trading operations were equally impressive. They engaged in a brisk and profitable supply service with the Fort, and business boomed as they began providing goods and services to the over six hundred soldiers stationed there. They built an empire that included a freighting business consisting of two hundred forty head of oxen and twenty large prairie schooners, each pulled by a six yoke of oxen known to be the fastest (because they were hand-selected and matched for speed), the best (because they successfully t
ransported their goods intact), and the prettiest (because Watrous was interested in breeding predominantly dark and light red oxen, some spotted with white). Typically the firm of Watrous and Tipton made two round-trip excursions each year between La Junta and Kansas City.

It was during this period that the buildings recently honored by the National Preservation Society were built: the mud-and-log Enoch Tipton house, the Martha Jane Tipton house, the adobe barn, and the stone well house.

Enoch Tipton died in 1878, and the Black Willow Ranch passed to his widow, Martha Jane, and his descendants. By the turn of the century it was bought by unrelated owners and developed as a ranch school for boys to encourage their training and education in the ways of the outdoors and especially of the west. After a devastating flood in the early 1900s, the school closed and the land passed through subsequent sales and purchases.

Today, owners Brian and Karin Boyd, from Santa Fe, New Mexico, are committed to preserving the ranch’s heritage while moving forward with sustainable ranching practices. Ranch manager, Ethan Savitsky, works closely with the owners to maintain an operating strategy focused on the future of agriculture.